Home Sports Maksvytis, who urged Evans not to be afraid, also saw a ‘mitigating... 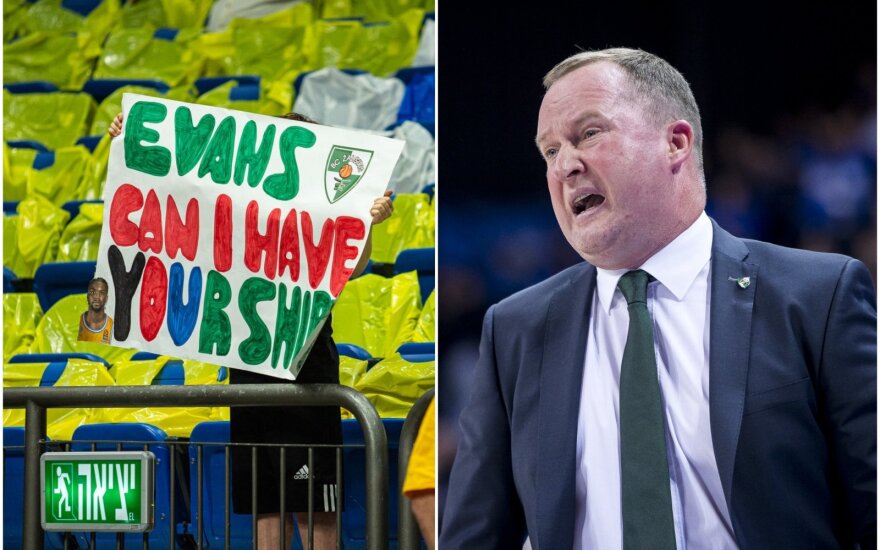 Kaunas “Žalgiris” unexpectedly tickled the soles of Tel Aviv’s “Maccabi”, which was assembled last summer and backed by a crowded arena, and which is packed with famous names. But even though they created an opportunity to win the first EuroLeague match of the season, the Žalgiris players themselves gave up, when the burden of the last blow proved too much for the newcomer of the team, Keenan Evans.

Playing in front of his former supporters, the American, who had just moved to Kaunas from the Israeli giants, was the match’s top scorer (17 points).

However, he didn’t decide to finish the last and decisive attack with a throw. Having “kneaded” the ball for a long time in the last seconds, K. Evans finally made a pass that led nowhere, after which there was not enough time to logically complete the attack – “Žalgiris” lost 83 :84.

“For most of the game the players followed the plan pretty well, and the loss ended in a bad start to the third quarter when we didn’t play the ball well. The good thing is we recovered the plot and had a chance to win with the last attack.

Unfortunately, it was no longer possible to request a one-minute break. We kept the ball until the end, although you don’t need to do that when you’re behind – then you won’t have a chance to redeem yourself. We should have played straight, but we stopped and didn’t create a normal shot. It’s a shame,” commented Kazys Maksvytis, the team’s helmsman.

After acknowledging that K. Evans had made a mistake at the end of the match, the 45-year-old specialist nevertheless saw it as a “mitigating circumstance”.

“After the game, I told him not to be afraid to take the initiative in such moments. Another thing is that at the end of the game, a defense-oriented five played without Lukos Lekavičius, who can change the cover players. As we can see, he lacked a bit of attack”, noted K. Maksvytis.

K. Evans himself explained that he did not understand how much time was left for the attack on “Žalgiris”.

“We had a chance at the end but I misjudged the time until the final whistle and we didn’t create a shot,” said the 26-year-old striker.

He and K. Maksvytis also complained about the limit of team fouls not being used intelligently in the first part of the game.

“What word is appropriate here – bad, terrible, unforgivable. That’s how you lose the game,” the coach said, shaking his head.

“We didn’t slow down the pace with fouls, we allowed the stands to go crazy and the opponents to seize the ball from anyone several times. We can’t let them crush us, we have to impose a rhythm of play that suits us. On the other hand, in the fourth quarter, we at least showed that we will always fight until the end. We cannot let this failure break us, we must continue to move forward, “taught K. Evans.

In the Euroleague second round next Friday, the Kaunas will also play away to Piraeus Olympiakos (Greece).

Argentine journalist does not recognize Claudio Borghi in Qatar 2022: the...

Raheem Sterling returns to England after armed assault on his home...